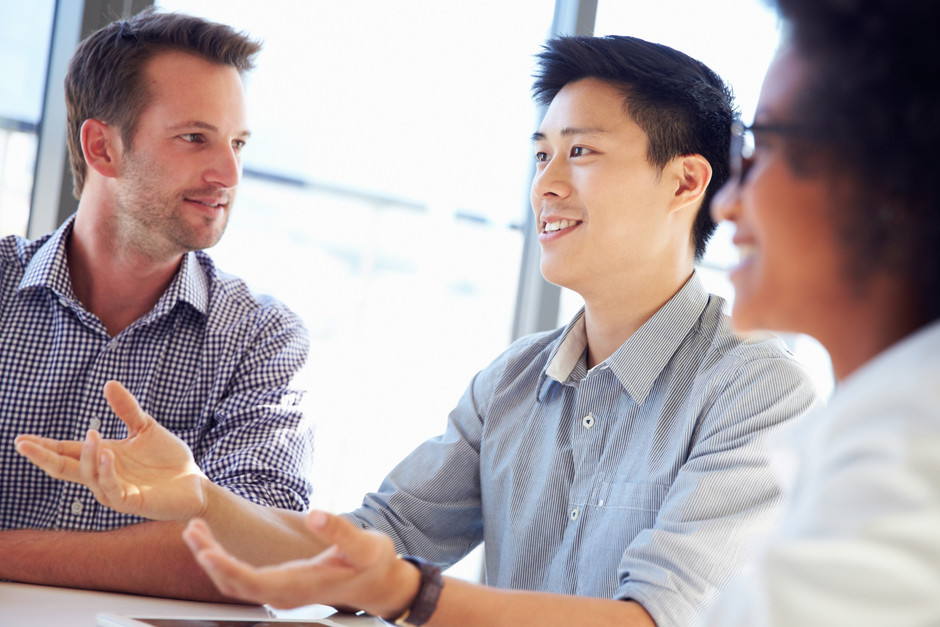 The 2012 election revealed important demographic shifts, among them the voting swing of Asian Americans. Here, in their own words, is an explanation as to why they’re moving left.

The answer could lie somewhere in northern Virginia, where Asian American political clout has grown fast, and leaned blue. Fairfax and Loudoun counties have experienced 71 percent growth in their Asian-American population over the last decade. Asian-American entrepreneurs increasingly dominate the business sector and top schools like Thomas Jefferson are 64 percent Asian American.

I decided to spend some time in northern Virginia’s schools and salons, law firms and churches, ESL centers and family dining rooms where Asian Americans work and make their lives. No one person speaks for a demographic this large and diverse, but I did hear recurring themes. Many people spoke about language and cultural barriers: election booths lack translators, cops have trouble understanding the citizens they protect and non-native speakers of English struggle to fill out Social Security and Medicare forms. Many worried about health insurance, and for the families that house multiple generations, the escalating cost of elder care is increasingly a problem. Immigration policy flickers constantly in the background, though it’s less a narrow policy matter than a symbol for the deeper sense of hospitality Asian Americans desire.

In the dozens of conversations I had with Asian Americans across age brackets and nationalities, almost all recognized the stereotypes other Americans hold—that Asians live in their own little world, that all they care about is business, that they don’t want to interact with the larger nation. Some acknowledged kernels of truth in the stereotypes, some were indifferent to them, others were excited that these stereotypes are ready to be challenged.

“We’re finally taking our heads out of the trench and looking around,” says Grace Han Wolf, Herndon Town Councilwoman and the first Korean American woman elected to office in Virginia. “But it’s taken us a while to appreciate the importance of a collective voice, let alone understand how we can exert influence.”

The resistance to politics lingers. “[My parents] have fond memories of beginning life here, but they didn’t feel welcomed by either party,” Mrs. Wolf says. “They just thought, well, this country has been good to me, let me do the right thing and try to choose between white candidate A and white candidate B.” A history of exclusionary laws – prohibiting Chinese property ownership during the Gold Rush of the 1850s, interning Japanese during the Second World War – didn’t help. “We interned our own citizens!” she says. “I think that put a huge chill in people’s desire to get involved in a political body that basically persecuted people who looked like you.”

There is also a deep bias toward solving problems within the community, to save face and keep grievances quiet. You own your success within your community and do not show weakness to outsiders, including the state. Few unemployed Korean Americans, for instance, register for benefits.

“We help each other, yes, but ultimately we have to do things our own way,” says Ok-Choon Park, a Vienna resident who emigrated from South Korea in his twenties and now works for the Department of Education. “Success is pursued more collectively than the American vision, but it is a Korean collectivism.”

Kumar Iyer, founder and owner of Rangoli Restaurant in South Riding, puts it simply: “Indians cannot fail.” The success is one found in education and business; politics is a distraction at best. “Most of us are so consumed with making our lives work that we don’t have time for politics.”

But something now is changing. This last election cycle saw unprecedented turnout, with 3.2 million Asian Americans casting ballots. A record 25 Asian Americans ran for office, triple the number who ran in 2008 or 2010, and twelve are now in the 113th Congress.

“We are finally hitting the level of prosperity where people can afford to say, ‘Is there something else I should be doing?’” says Mrs. Wolf, who just won her second term. “My parents always asked where the money was in public service. For Koreans at least, volunteering beyond one’s job and family responsibilities was only familiar in the context of church.”

“We are not an assertive culture,” says Jimmy Rhee, Virginia’s Assistant Secretary of Commerce and Trade for International Trade and Investment activities. He emigrated from South Korea at age 13. “We prefer humility and meekness. If you look at some of the best high schools and colleges in the country, Asians dominate the top 20 percent. If you look at the Fortune 500 CEOs, we have nine. I go around and hear my fellow Koreans tout their ‘model minority’ status. But I think in America you have to be a squeaky wheel.”

Korean American Delegate Mark Keam first won the 35th District in 2009 after campaigning for Obama. He says he found it “weird” to discover that “old white people” still controlled Virginia politics. “Here you have a Democratic party that supposedly represents minorities and openness, and yet in the most diverse part of the state the party infrastructure was still white,” he says.

In response, he decided to adopt parts of the President’s appeal. “I told them that I’m not the traditional Democratic volunteer,” Mr. Keam says. “I’m part of the change.”

The issues can be prosaic: zoning, trash pick-up, enhancing the storefront signs of Korean-owned coffee shops. “In the past these business owners have been at a disadvantage because they didn’t know someone in a position [of political power],” Mrs. Wolf says. “My job is to tie Virginia’s policies to their everyday wellbeing, their schools, their neighborhoods.”

Mrs. Wolf and Mr. Keam, both Democrats, are ice-breakers. As for which party the politically engaged should support, I heard one perception repeated across the various nationalities, ages and education levels: “Republicans are obnoxious.” Nearly everyone expressed frustrated pity for a party out-of-touch with America’s changing face. To these people Republicans exclude. They exclude socially, ethnically, religiously and politically.

Branding is partly to blame, but Asian Americans perceive a deeper cultural blind spot. From tone to policy priorities to the overwhelming whiteness, there’s a visceral sense that the party doesn’t want them, that it doesn’t care about where they came from or where they’re going. In this last election, Indian Americans likened Romney to that boss who would hire them for skilled IT labor on the cheap. Republican messaging seemed dismissive of education and crudely capitalistic. The overall agenda also seemed to glorify a cloistered past rather than offer a roadmap for an expansive future.

“The Democratic party looked much more forward-thinking in this election,” says Mr. Iyer. “Their convention was better organized, their campaign more fluent with new technology. Mitt Romney seemed more about the retention of American values, which isn’t bad, but, because of democracy and the way the world is positioned, it’s time for discrimination to be a thing of the past. If a mindset of acceptance didn’t pervade this country, Indian Americans would have stayed in the home country, with the others who are more traditional and less well-educated.”

“To me, being liberal means a very expansive view of the world, open to new ideas and new experiences,” Assistant Commerce Secretary of Virginia Jimmy Rhee says. “To me conservatives don’t convey the expansiveness, that stretching of a paradigm, which is not only appealing to immigrants wanting a spot at the table, but also to the younger generation.” Rhee and others emphasized the non-negotiable importance of education for Asian Americans, whose institutional cultures only reinforce wariness toward a party that seems to doubt facts and science.

“We come from places where education is the only way to succeed in society,” says Mr. Choon. “Those values don’t disappear easily, even if the way to success is broader in America.”

The “you built this” individualism celebrated in Tampa alienated Asian Americans who think in more interdependent terms. Even with Asian business owners, the term “entrepreneur” is anathema for its associations with exploitation and selfishness. When I met Mr. Iyer and described his founding of the award-winning Rangoli Restaurant as “entrepreneurial,” he corrected me. “When you talk about entrepreneurs, you’re talking about someone looking at profits, at the bottom line, uncaring toward his employees. But this was more about passion, about making something of my own and sharing it with others.”

By contrast, Democrats struck a chord. They knew how to penetrate the networks where many Asian-Americans share information—parent associations, alumni networks, extended families, churches. They were more sensitive to the communities’ issues—healthcare, immigration reform and education—and their own ethnic diversity and style of outreach inspired trust.

“For minorities, there’s a world of difference between ‘reaching out’ and ‘attracting’ minorities,” says Delegate Keam. “On the rare occasion when I see Republicans at political receptions that involve Asian cultural attractions, they seem only to want to take pictures for the photo op. That’s ‘reaching out.’ ‘Attracting’ is saying, ‘Look, we have an issue. We want to get to this tax credit bill, or we want to pass this education reform bill. We want you to tell us whether this will help you or hurt you and why.’

“Right now, those conversations aren’t happening on the Republican side. The only thing that happens is Frank Wolfe or Tom Davis shows up at a dragon festival, eats some spring rolls with the cameras on and says, ‘Hey, I reached out.’”

During the last campaign, Democrats in northern Virginia were much more aggressive at the grassroots level. “You have to push down at the local and ethnic level to mobilize Asian-Americans,” Mrs. Wolf says. “We don’t have a top-down spokesperson because we haven’t coalesced. It’s all still happening at the level of individuals.”

The appeal of Obama himself still runs deep. The fact that he has Asian relatives, grew up in Hawaii and at one point spoke an Indonesian dialect is not forgotten, and Asian Americans see in his foreign policy a respectful sensitivity to Chinese Americans that refuses gratuitous machismo toward China. Second and third generation folks identify with his ability to live in multiple worlds at once, and his community-organizing ethos jives well with the tight-knit, self-sacrificial communities in which so many Asian Americans participate.

For those building an increasingly comfortable and confident life, there is gratitude for the country that enabled them to flourish. “There is no such country like America,” I heard repeatedly. “It is the American ground that allows Asian values to grow and excel.”

So the question is, who will voice pro-family values in fresh, Asian-accented ways? Who will widen the audience for pro-growth policies? Who will talk about immigration? Asian Americans are eager for ideas and anxious to share their own. They’re just waiting for able ears.