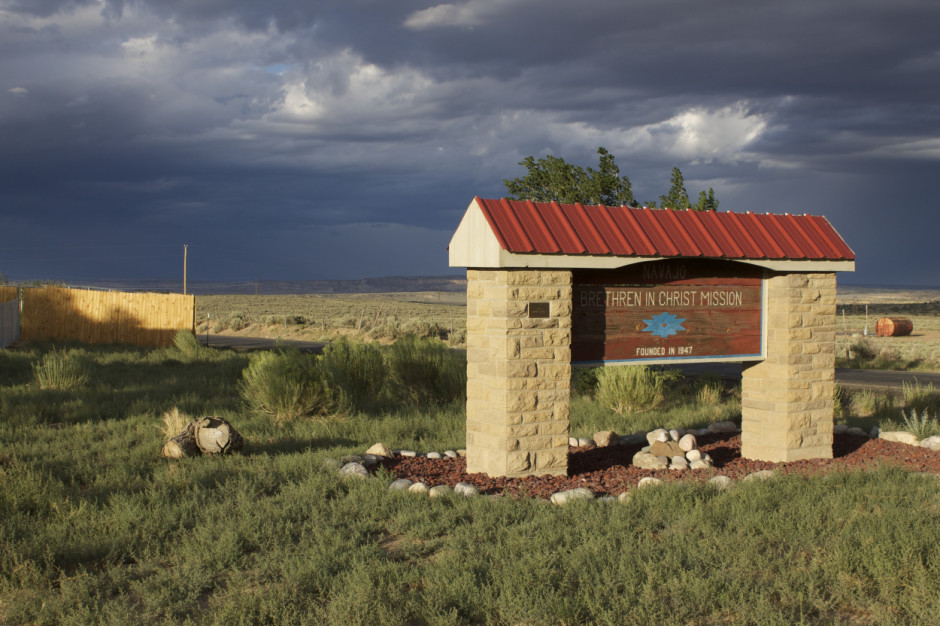 A mission in rural New Mexico restores identity and a future for Native American men once defeated by addiction.

The wind howls through the clapboards as four white folks huddle around a desk sheltered on the high plains of the New Mexican desert. Dust kicks up ghosts from the decades when this settlement boarded Native American children in the school of “assimilation,” erasing their tribal identities for the cause of Euro-American hegemony. The walls now protect one of the most successful drug and alcohol rehabilitation programs in the country, graduating three quarters of largely Native men to lives of sustained sobriety. I’ve driven miles through clouds and a flash flood to understand this reversal.

“We’re the only program I know of that is trying to integrate cultures,” says Ralph Yoder, rocking back into the clapboards. He works directly with the men. “We are trying to bring Christianity into the Navajo culture itself, to allow the guys to be who they are at the deepest level.”

This refrain rings like a drumbeat at Overcomers. A residential treatment facility run out of a faith-based mission two and a half hours north of Albuquerque, Overcomers is directed primarily, but not exclusively, toward Navajo men addicted to alcohol or drugs. Six to eight men arrive twice a year, most straight out of prison and referred by the judges and local probationary officers who have come to see the program as their best shot. The residential portion lasts three months before the guys enter another 90 days of aftercare where weekly check-ins and mentored accountability gently transition them back into responsible independence.

While living in close quarters on these premises, the men take classes, participate in one-on-one counseling and explore the Christian faith and their Native American heritage through study, ceremony and practice. The curriculum takes them through the Bible, effective communication and conceptions of “manhood” in their modern Native context, personal finance, the Navajo language, health and nutrition, computer and career-preparatory skills, along with daily moral inventories and guided introspection geared toward uprooting the locus of their addictions. A distinctively Native imagination is encouraged by way of art and song. The men learn to support one another and eventually live out of new senses of self and horizon.

“We’ve had guys say, ‘Can we stay here longer?’” Ralph says as we sit in the building lying empty between this year’s spring and fall sessions. “We say, ‘no.’ But we do become family.”

This tight-knit warmth is the special product of intentional departures from the philosophies and strategies of the average alcohol rehab regimen, and it contributes to Overcomers’ overall success. The national average for sustained rehabilitation lingers at or below 25 percent. Overcomers caps 70.

Strategic ground rules account for the eye-popping record, though they don’t explain everything. Rigorous interviewing narrows the pool: Ralph needs to see real community potential, not a popcorn selection of incompatible souls. He limits admission to eight men so each person can get one-on-one attention while building collective social trust in the 90 days. The co-ed thing was tried and found wanting—wandering eyes impeded progress. Personal responsibility gets hammered home daily as the men cook for themselves and clean the building.

The real secret, though, lies in a pioneering integration of Native American healing rituals with a Christian orientation. The idea is to restore a once-shamed sense of cultural identity while simultaneo

usly offering an eternal destiny, one believed to wield the ultimate power to heal and recover human lives.

“When they come in we tell them: ‘We want you to know who you are and who God created you to be,’” says Duane Bristow, director of the mission at large. “They’ve lost their identity by the time they’ve gotten here. They’ve long been told they’re no good. That their culture is bad. They’ve been drunk all their life. And they believe this is their permanent lot.”

taste of cultural imperialism and post-colonial domination. The Good News was the White Man’s News, a conqueror’s message, and for Native American church-goers today, most pulpits preach either/or. Either choose Christianity and leave your Native rituals behind (they are the Devil’s brew), or stay in your pagan ways and never shadow the altar rail. You can’t be both Native American and Christian, says history and (Western) theology. Or so rings the loudest narrative.

Overcomers disagrees, and has been trying for 16 years to subvert this disintegrating message into something that brings full, deep restoration of the Native American self into the demands of his cultural and historical context. One man who’s been helping the program chart a path to renewing the minds, bodies and souls of these dampened addicts is Casey Church.

His name means “Hole in the Clouds.” A member of the Pokagon Band of the Potawatomi Indians of Southwest Lower Michigan, Casey and his wife Lora, a Navajo, have been involved in what they call “contextual ministry” for almost twenty years. They are Christians wholly committed to affirming, respecting and embracing what they view as God-given cultural realities of Native American people. Casey is finishing up his PhD at Fuller Theological Seminary’s School of Intercultural Studies in California, but works by day at an amusement park in Albuquerque, where he lives with Lora and their five kids. He drives up to the Overcomers mission on a monthly basis to encourage and help guide a specific path of Native-Christian integration.

“You can’t put God in a box,” Casey tells me as I watch him fan the flames around pottery he is preparing to sell. “Christ came from a world totally different than

this. ‘My ways are not your ways,’ God said. Then He comes down to us and He becomes totally us.”

“98 percent of Native culture is good,” he continues. “The songs are good. The prayers are good. The sweat lodge is good. There’s an evil side, yes, so the Christian needs discernment in appropriating what’s good and ignoring what’s evil. But there’s an evil side of every culture. We know that what Europe brought to this country had plenty of evil in it, and the majority Christian expression we see in America today is European in origin. The pews in rows, the pastor up front on a pedestal, organs in worship and metronomic rhythms.

And that’s not evil, but it is cultural and limited, and it doesn’t speak to the deepest parts of my soul, or many Native souls. So I’ve set out to see how the 98 percent of good Native expressions can also be used in Christianity, to prove that we don’t have to accept the pre-packaged Christianity that’s always come to us.”

Much of Casey’s work is academic, but he is increasingly finding that churches historically suspicious of Native American spiritual practices are calling upon his insight. Some hoping to become more “multicultural.” Others genuinely in need of new ways of reaching the substantial Native population in the southwest.

Meanwhile, un-churched Native Americans are discovering an invitation to re-familiarize themselves with the traditions of their heritage, and to do so with pride and productive intent. In a great reversal, Native American identity is being reclaimed at Christianity’s invitation.

Casey has thus helped Overcomers’ non-Native staffers experiment with their own trials and errors as they seek to integrate Christian faith with Native rituals for the healing of drug and alcohol addicts. Overcomers no longer calls its Sunday services “church,” for example. Instead they’re “gatherings.” The men and the staffers sit in a circle around a drum. There is a hogum on Overcomers’ premises. Sermons are preached from the chair level with the people, and it’s more of an interweaving between Scriptural meditation and song and dance. Everything’s fluid, on the same plain and circular, reflecting unbroken community and centuries of Native American belief about the seamless interplay between man, the earth and the Creator. Most revolutionary? Overcomers runs sweat lodges as Christian confessionals.

“The way I explain it to people, a sweat lodge is a Native American men’s prayer meeting in about 120 degrees.” Ralph is telling me this with a wry grin. “99 percent humidity. And I’ve seen guys who have had the toughest of shells break down and cry. Because it’s a place that’s familiar to them.”

Through all the trial and error the men undergoing treatment are kept in the loop and asked to help craft the most effective forms for their spiritual rhythms to find meaning and release. In a sense they own the process to their healing even as they surrender it to the Creator they are told cares to save them.

“We get a lot of folks from different clans of Navajo, different tribes,” says Ralph. “They have different beliefs, different ceremonies. I’ll try to open it up to them, to let them sing what they wish around the drum. To let them lead when they feel ready and strong enough.”

Evidence of this cultural and spiritual discovery litter the walls. One graduate painted a mosaic of wild horses frolicking through the open plains as the figure of Christ overlooks with open hands and two noble eagles perch on his right and left.

Another took a piece of chalk and in fifteen minutes expressed his view of the cosmos on the board.

Perhaps the most poignant came in a speech from 2011 in which one of the graduates said that it was at Overcomers that he realized he could worship God through his Navajo music, the same God who had gotten a hold of him in jail. “Ajéí Sodizin” was the title of one of his songs, and it translates “I carry your prayer in my heart, a heart prayer.” This and one other he wrote while in residence, and they are now regular features of Overcomers’ Sunday gatherings.

There aren’t many Casey Churches in the Native American world, but interest is growing as many see a promising way to reinvigorate Native American confidence through the doorway of this country’s majority religion. The premise would be suspect if it didn’t work so vividly. Over 120 men have gone through the Overcomers regimen, and over 80 of them have found revitalized meaning in their tribal traditions and hope in what was once a White Man’s creed. Related implications for Native American resurgence across a range of destabilized fronts are not far off. For those looking for hope the way of the desert road is patience and perseverance. A new thing may lie just beyond the hole in the clouds.

The Eternal Lens: Christians and the Press