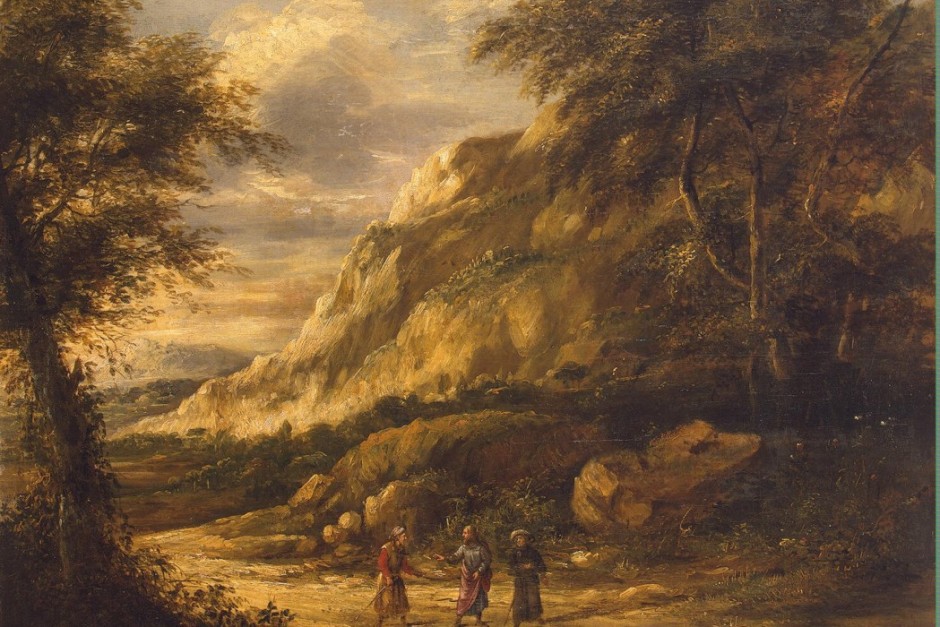 God reveals Himself on the way, but likely not often in ways we can neatly tie together.

“The Lord has orchestrated our time together. I am in awe!”

So were the endearing words that hit my inbox from an old friend surprised that I’d recently moved to her home state of Texas. She, her husband and newborn were coming up for Houston’s rodeo and livestock show and learned that I was no longer at a distant 1,400 miles east.

I warmed to her confidence, even if I would not have proclaimed the same. It was an expression of expectation, appreciation for me, a nod to the founding anchor of our friendship and an encouraging possibility that bolstered my sense of scramble in a chapter that has yet to form a steady arc of routine and cohesive purpose. “I hope she’s right,” I thought.

A few days later I found myself sitting next to a stranger at a communal dinner at Laity Lodge in the hill country, knowing nothing except our common cause—we were there to attend a retreat for writers and artists. I soon learned he was studying music and theology at a seminary in Dallas, but not one minute in to hearing about the sort of journalism I’m pursuing in Houston, and he asked if I was familiar with a cast of characters who, yes, were precisely those who had shaped my thought and writing interests prior to leaping off on my own. My shock at his accuracy must have been evident, because he laughed, saying simply, “that’s the Holy Spirit for you.”

Coincidences are funny things. We like them, but they can be as puzzling as they may mean little. Our brains are wired to find patterns—we look for connections even when there are none to be had. In her book, The Up Side of Down, Megan McArdle describes an animated sequence where one ball appears to run into another just as the second ball rolls away. Most viewers assume the first ball made the second one move without considering that perhaps the second ball got its start some other way. Humans do well under nameable conditions; nihilism is not for the faint of heart. But add a theistic lens to our pattern-making instincts and we have the perfect recipe for ascribing to “God’s will” what may only be the quirky collisions intrinsic to a finite space. Why should we assume that God is more active in fortuitous circumstances than in any other conditions?

I’ve long had a tiptoeing relationship with Providence, hesitant to claim it unless an overwhelming data palette coheres to point to His purposes meeting my need. Even then it seems safer to take little steps out of gratitude than declare an understanding of God’s plans. What ground have I to ascribe events to His orchestration when (a) my own purview is so limited and self-revolving, and (b) I tend to credit “Providence” only in the good times, less when hopes are obstructed or misfortune intrudes.

This pondering around the merits and pitfalls of a sort of “coincidence theology” began out of my own puzzling around what line divides the call to live each moment with holy expectation and that overwrought desire to find a cross on every “t.” Some Christians seem quick to read Providence into the present, impatient before the possibility that God’s purposes may more likely reveal themselves over the long arc of retrospect (let alone a spatial horizon that transcends one’s own). But is the proper corrective to go about our normal lives without any curiosity as to how God may be working, without any prayer that we may see in our circumstances and those of our neighbors at least some arrows pointing to how we may live or what we should do? How do we honor the belief that God works in the everyday without overspiritualizing each minute and denying our own agency?

In the days following the Resurrection Christians just celebrated, Luke tells us that two of Jesus’ disciples were walking to Emmaus when a stranger joined their company. Their faces downcast as the newcomer asked what they were discussing, they conveyed their bewildered pain at having lost the one they’d come to believe was Israel’s Messiah, only to be further disturbed by rumors of an empty tomb. The stranger responded with severity, explicating (unprompted) the prophetic annals, but they walked companionably until reaching Emmaus at dusk, wherein the disciples—either out of growing intrigue or common decency—urged their new acquaintance to stay and sup with them. He accepted, and upon sitting down, the stranger took bread, gave thanks, broke it and began to give it to them.

“Then their eyes were opened and they recognized him.” The Host was he who they had invited to be their guest. Grace appeared in the midst of their attentive normalcy.

There is something about this story that leavens my fear of misdiagnosing God’s plan. Here were Jesus’ own disciples doing common things in an uncommon time—walking to a village after their Messiah had died, welcoming a stranger in the midst of internal disarray, sitting down to a meal just because it was time—and somehow, precisely in all of that, Grace opened their eyes to see the most astonishing familiarity. They encountered God—literally!—in an occasion of seeming happenstance, but He came in a way, and in a language, that they could not have foretold. Their wills enacted despite senselessness around them, and sight came as a gift.

So we believe in a God who acts, but not one who is waiting for us to graduate from his college of cosmic puzzle-piecing. He reveals Himself on the way, but likely not often in ways we can neatly tie together. Even so, perhaps thus so, we are not prisoners of some needle-in-a-haystack will that leaves us inert until we find it. Puppets are not human. Pilgrims receive and we honor, we pursue sight and we keep pursuing more. There is beauty in the intentions we craft with a view to invite God in as guest and host, to meet and guide us through mess and through sense, intentions that grow ever more graceful as our knowledge of He who we love goes further up and in.

This was originally published on April 23, 2014 in Humane Pursuits.