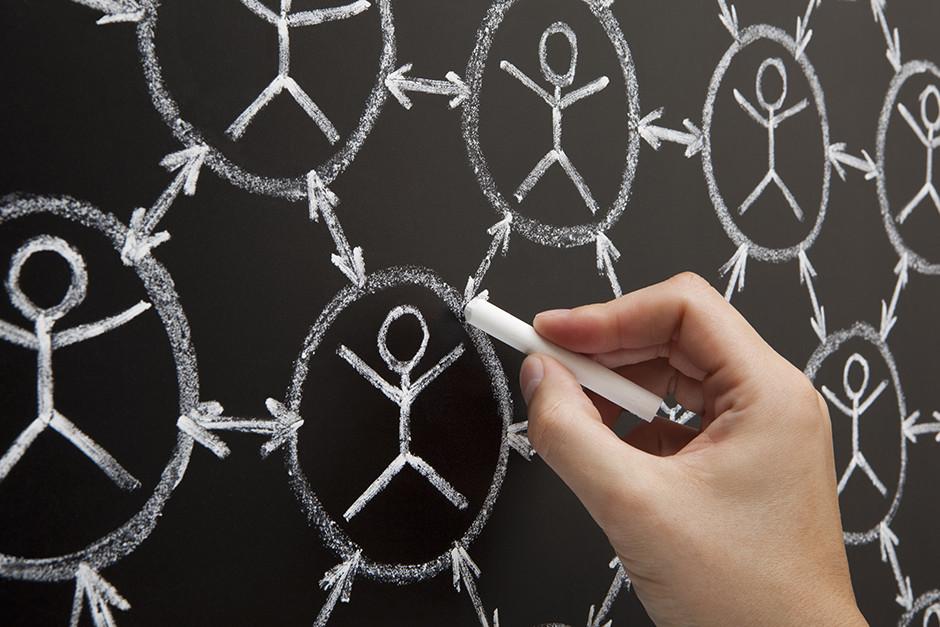 Institutions are out, networks are in. What are the consequences, the perils and the promise?

Everyone’s interested in human networks these days. How to make them work, how to structure them, how to facilitate collaborations within and between them, who to invite in.

In the 1950s, 60s and 70s, people worked in big companies and held long-term contracts with them, their relationship with other institutions understood largely in terms of competition.

Today, we work and affiliate in networks, a mindset that assumes fluidity and collaboration across sectors and ultimately believes that human connections have the power to change the world.

Take this video presented at the Skoll World Forum back in 2013. Entitled “Dare to Imagine,” it’s an 8-minute snapshot of the ethos, applied specifically to the aims of social entrepreneurs and system change. From Huffington Post founder Arianna Huffington to PayPal and Tesla superstar Elon Musk, recognizable faces in the age of technological disruption exhort an openness to solutions from unexpected quarters, all-in participation and the importance of scaling “impact” over scaling an organization.

Or take this popular TED talk on collaborative consumption given by Rachel Botsman. It’s a clear and punchy presentation on what’s enabled businesses like Uber and AirBnB to thrive – a willingness to trust in strangers and a desire for direct exchange and meaningful human contact.

It’s the religion of the innovators, fueled by technology, that has brought about a sea change in how the educated class understands the means of production and interacts with the marketplace. Lean and flexible teamwork is now preferred to hierarchical lines of delivery. Access is more important than ownership. Cross-sector learning is valued above domain expertise.

For the industry leaders and educated young who are most apt to think in these terms, connectivity is king. User-friendly platforms and “curation” broadly understood are goods in high demand – the community has become the content. Peer-to-peer exchanges, whether in learning or goods & services, are reducing the need for middlemen. People move from job to job increasingly detached from the institutions listed on their resumes – a longer-standing affiliation is instead found in auxiliary professional networks charted on platforms like LinkedIn or in membership groups of like-minded yet cross-sector talent, oriented around a core set of ideas or societal problem.

As the pace of change has accelerated, 20th century hierarchies have flattened to accommodate a more fluid structure that’s nimble and efficient, and there’s a lot to commend. The world is a more creative, flexible and possibility-filled place because individuals can eschew the institutional straps of their fathers and collaborate with looser ties. Options for solving ever-thornier problems have mushroomed both in solution combinations and the sources for their delivery. User-generated platforms convey a sense of inclusion. Freelancers abound. There’s an air of magical possibility: With the ability to connect to others – any other – so easily, a Pandora’s box of creative breakthroughs seems always within our reach … if only we figure out how to organize the overlapping rings of relationships.

But, recently, as growing volumes of ink have been spilt exploring a more tangible manifestation of this brave new world – the sharing economy – I’ve wondered if we’ve reached an uncharted step between the potential that networks and platforms create and the substance (and sustainability) they actually afford. The explosive popularity of direct exchanges through Bitcoin, AirBnB, TaskRabbit and Kickstarter confirms the wonders of instantly connecting one person’s need with another’s time. But this economy’s under-institutionalized pattern of activity also reveals some limits of a world increasingly enamored with connectivity for its own sake.

I’m just going to mention a few concerns – not so much to denigrate a wave of thinking, working and relating of which I’m also a beneficiary, but rather to prompt some questions that get at the need to think institutionally about the very arrangements that are in the midst of disrupting institutions historically understood.

First, a concern for durability and commitment. Joel Stein said it well in his recent Time cover piece: “We’ve moved from conspicuous consumption to conspicuous experience.” While he meant it in the context of today’s sharing economy (e.g. instead of wanting to own the next car we’re more likely to hire a car to take us to the next experience), it’s a sensibility that applies also to networked thinking, where access is the first and celebrated good. Access to certain people, access to different experiences and ideas. And access, while a necessary door to opportunity, can quickly become a drug, which, pursued for its own thrills starts to yield diminishing returns. Its addicts become unfocused, more means- than ends-oriented, and defined by a spray of fleeting encounters, less a durable commitment to building a consistent stream of value over time. This is as true in the professional realm as it is in the personal.

Second, a concern for transcendence. I mean this not in the spiritual sense but in the belonging sense – to feel like each of us belongs to something larger than ourselves. Whether that thing is a creed, a craft or an institution that predates us and will outlast us, our identities are shaped and sustained by the who’s and what’s we are investing in and sacrificing for. It’s much harder to feel this way toward a network, which relies on the instrumental urge between individuals – or even groups of individuals – to leverage their relationships with one another for mutual gain. And that gain can serve a much wider world, surely, but the collaborations are typically atomized, not primarily accountable to the founding platform from which they drew their capital.

Third, a concern for checks on human frailty. Reputation is the currency of the future, says sharing economy expert Rachel Botsman. “It will be more powerful than our credit history.” Every click, every comment, every purchase, every drive, all will feed an ever-solidifying report card of how we behave and what we care about. In Botsman’s view, this is the genius of our networked world. We are being watched by more eyes than ever before. Our activities are more accessible than ever before. The rise in peer consciousness is enforcing a surprise form of social trust, one that’s individualized and based on personal record, not, increasingly, on institutions housing our exchanges.

There’s so much possibility in this dynamic, but also some thinness. Institutions have historically played a big role in being protectors of trust. Can we really transfer so much to individuals? Are rational incentive structures really enough to motivate reliability and good behavior? Is the freelancer’s method of measuring value taking natural human frailty into sufficient account?

Fourth, a concern for substance. Every generation has its jargon, but it does seem like the public lexicon has accumulated a new mass of cached words that speak more of process and connectivity than they reveal much of substance. Concepts like “curation,” “design,” “emergent” and “catalytic” each mean something important, and they’ve adapted well to the needs of different fields, but I do worry that more and more people are satisfied simply to dwell in this fancy process-speak and forget what end they are really serving.

Fifth, a concern for the average Joe. While most networks operate on the principle of exchange – that what one person offers is what another needs – they can also reinforce class and cognitive homogeneity, closing out those who don’t speak the same language or lack the luxury of being able to swing from one ring of loose ties to the next. Networks tend to benefit the ambitious, Type A and self-reliant; they don’t typically work as well for normal folks.

This is just one broad-brushed attempt to name a sensibility I’ve noticed take over the leadership class and also define the ways in which more and more individuals are conceiving of their affiliations, leverage points and very identities. In an age when historic institutions are under public siege, networks provide a viable alternative. They’re more agile, open, organically defined, and they have the appeal of serving the world’s most promising commodity: human beings. But if networks and the mindsets that accompany them are to be the 21st century institution, there’s a huge opportunity to think carefully about how to build the infrastructure. The concerns mentioned here may be a starting place.

This column was originally featured in The Orange Country Register.