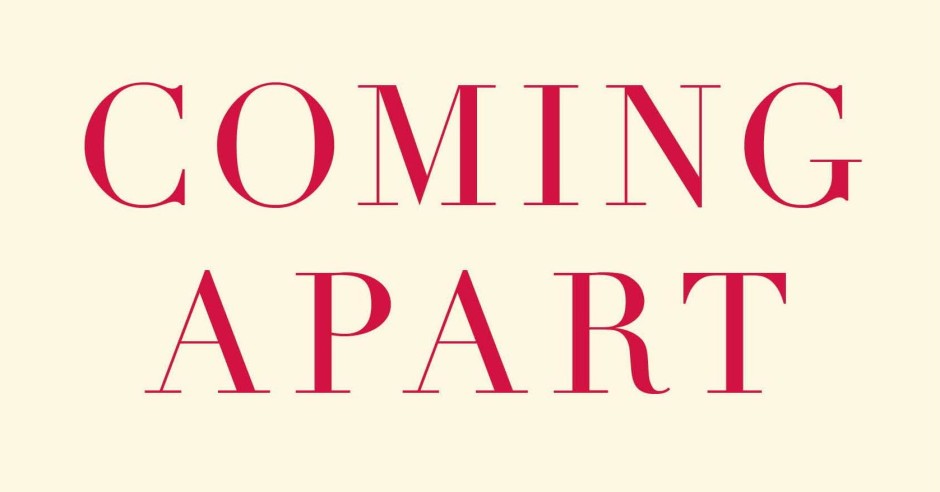 Charles Murray’s “Coming Apart” tugs at the heart as much as the wonk, and begs some soul-searching for those in positions of traditional influence.

I found Murray’s thesis as troubling as it was impressive. Troubling because it rang true, impressive for the same reason. The central point – that the country is splitting at class seams and staring into an ever widening, decidedly un-American abyss – struck a stronger chord than the cultural particularities Murray ascribes to the top 20 percent, stronger even than the “stuff of life” (family, vocation, community, and faith) unraveling now for those in the bottom 30. To acknowledge the reality of an isolated, insular elite, and to find myself an unassuming member of that tier (my score: 22), not only raised alarm bells around the state of this country and my responsibility to it, but more painfully lashed the nerve of any Christian conviction I might have about the equal dignity of every human being, and Christ’s command to love beyond creed or biological tie, club or social comfort. Murray’s book is important for all sorts of reasons, and the debate it has sparked among policy wonks, cultural critics, economists and educators will be one to follow seriously. But at the deepest concern for love of God and neighbor, “Coming Apart” demands a thoroughly Christian response, one likely lined with more uncomfortable “how now shall we live” questions than “fix it” prescriptions from the top.

It’s no news that the last decade of globalization and social technology has siloed most of us into clubs with our clones, just as we’re more interconnected than ever and the layering potential of social webs boggles the mind. But today’s elite homogeneity doesn’t look like it did 50 years ago. As Murray describes, our present communities are less defined by race, ethnic background or inherited “class” (in the old-fashioned sense) and more by talent, education, tastes and cultural preferences. What makes the new uniformity so powerful is the human agency driving it…for those who can hold the reins. While biological factors still play a role in determining opportunity and life experiences (the strength of which varies depending on the person), where you go to college, what you earn, and how you relax has less to do with your DNA. Those of us who have made choices in these realms and don’t regret them are gravitating toward like minds and capacities, in large part because we can. You could argue this is the brilliant telos of the American project: giving citizens space to pursue their lives with zest and volition toward their conception of the best. But just beneath the promise is the fact that not everyone has this chance.

Few civic institutions remain that chasten our natural tendency to waddle over to likeminded persons and build a home there, and the three that maintain the potential to mix things up – the church, the military, and public education – are themselves getting strong-armed by the demographic and cultural delineations increasingly accepted as the appropriate (inevitable?) mechanisms for societal organization. We simply don’t relate on a committed basis with those who have different educational backgrounds, different political views, different levels of worldly awareness and different capacities for intellectual or professional achievement. If we do, it is typically on a ritualized schedule of volunteer service: the fully capable Us lending a hand to the needy Them. I say this without judgment. We are finite beings limited by time and a great case can be made for engaging the sphere you know best without dabbling in foreign realms, recklessly wreaking havoc out of ignorant good intentions. But if we’re to accept Murray’s claims, and more fundamentally the claims of a Gospel that proclaims good news for all, is it not incumbent upon us to consider how we who can afford the transaction costs might make choices that enable us to build real relationships with those whose very otherness expands our understanding of Imago Dei?

I’m envisioning more than a Teach For America stint or a purchase of Rwandan earrings from Ten Thousand Villages, neutral or positive though both may be. Murray accurately describes the super intentional approach of a new upper class earnest to absorb bohemian values to satisfy their spiritual and material yearnings. But what about getting beyond controlled communities where we wield diversity at our command, and instead humbly step into the neighborhoods and “classes” whose very lack in certain spheres necessitates an authentic interdependence that involves as much spontaneous self-sacrifice as it does honesty about one’s own needs?

I say all of this with a certain amount of self-consciousness. For the past couple of years I have lived alone in a bucolic part of Washington. I work for a prestigious newspaper. I value freedom and flexibility and I’ve been a little skittish about committing to imperfect institutions, some of which contain real communities from which I would no doubt benefit in the giving and receiving. But in the midst of those accoutrements has been a heart still beating to love for God and His creation, in all its breadth and complexity. I don’t want to live in a tunnel of my creation, reverberating only from the walls that I understand, or that I think understand me. And in the times when I do desire that I know I am being lazy, arguably unChristian.

Murray’s portrait of our current state of affairs hit a nerve, one that is prompting a reevaluation of how I make decisions about invested allegiances like church, neighborhood, even vocation. It certainly reinforced the importance of teaching the classical virtues to one’s kids and pushing them to experience people and challenges beyond their familiar habitat as they work them out (my own parents were wonderful in this regard). On a corporate scale, some have suggested a National Service Program to force adults on either side of the abyss to live and work together for a few years. It’s an idea, but I fear it would only serve to band-aid the deeper issue. In the words of Anne Shirley (yes, I’m quoting “Anne of Green Gables”), what we probably all need is a darn good spanking, and the recovery of a spirit toward others that is as adventurous as it is humble. To beg this of my fellow citizens is folly, so I’m starting with me. I’ve been hearing a lot of clamor for a better elite. Insofar as I’m part of its younger terrace, I’m going to be looking in the mirror with more crinkled eyebrows, searching out the necessary adjustments.

This post was originally published in March of 2012 in a four-part symposium on Murray’s thesis on Humane Pursuits.